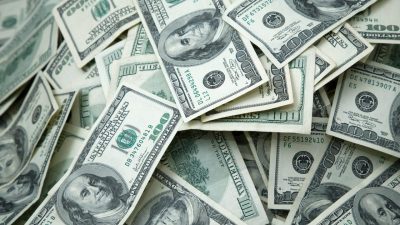 The Gold Digger – Financial abuse can be perpetrated in a variety of ways. Typically we think of it in situations when the male partner either earns all or most of the money and controls how it gets used (e.g., keeping the woman on a tight budget). Or we see it when the man expects the woman to manage limited funds, perhaps pushing her to work hard and support him while spending uncontrollably and making it impossible for her to make ends meet. There are many variations of these two overarching scenarios, but there’s another one that I believe needs to be discussed as well.

The classic gold digger looks for a woman with the means to support him.

Yes, ladies, there are men looking for sugar mamas all over the place.  If you are financially secure or outwardly successful (drive a nice car, own your own house, etc.) then you may be the target of men who will financially abuse you.  They may manipulate their way into your heart and pull the pity strings so you will offer up more than you should in the name of “love”.

Whether they actually love you or not is up for debate. But the truth is they want you, at least in part, for your money.

I recently received a message from a woman who wasn’t sure if her scenario was truly financial abuse. She didn’t fit either of the more classic two scenarios mentioned above.  Instead, she was a successful career woman who had met this man a long time ago during college and reconnected with him recently.  Because she already knew him (as opposed to meeting him online), she thought that he was “safe”.

She described him as wonderful, loving, and intelligent; she talked about how in love with him she was, how perfect he seemed.  Then, as an afterthought, she mentioned that he had a number of health issues that caused him to be  underemployed.  It was as if she felt sorry for him and knew that he was capable of more, but he wasn’t able to earn more because of his health issues.

As her story went on, I realized how she was blinded by her love for him. And it seemed that he knew that and manipulated her to get her to pay for everything even after saying he would pay.  There was always some excuse or “crisis” that kept him from being able to hold up his end of the agreement.

What I found fascinating about her story, in a rubbernecking-to-see-the-car-wreck sort of way, was that after she paid for him to move from another state to live with her and her children, she immediately felt something was wrong.  She said she cried every day after he moved in.  She knew in her gut something was wrong, but it wasn’t until he was in her space that she was no longer able to deny it.  Her body physically reacted to him.

Listening to one’s intuition is more valuable than we often give credence to.

When she told him it wasn’t working and he needed to leave, she ended up paying for that, too.

Because the relationship started as a long-distance affair, it had a certain honeymoon quality to it.  Every visit was a fresh, exciting experience.  And the fact that he was broke and sick didn’t seem to bother her. She was so in love with him that she just kept giving and giving without recognizing that he was manipulating her.  He even manipulated her into marrying him.  She was excited to get engaged but wanted to take things slowly.  He pushed her and made her pay for almost everything.

Then she moved him in again and she immediately had the same negative reaction.  This time he got mean.  And the abuse escalated.  It cost her even more money to get him out of her life.  Last time we spoke, she was still dealing with issues and paying an attorney to help her extricate herself from his claws. -The Gold Digger

What I see in this story is a man who set out with the intention of finding someone he could get to fall for him.

Once he had her hooked he started slowly grooming her.  First, playing the victim to get her to help him with medical expenses.  Letting her volunteer to pay to come visit him because he couldn’t afford to go see her.  Then it began to escalate.  He quit his paltry job to move in with her, fully expecting her to support him and put him on the title to her house.

When she asked him to leave, he expected her to pay for him to move back to his old city.  She felt so guilty that she even helped him refurnish his apartment.  Then he manipulated his way back into her heart and continued the financial abuse.

Eventually, she realized that as much as she thought she loved him, she really had put him on a pedestal, and he had taken advantage of her.

She didn’t even know if what happened was financial abuse.  I assured her it was.

He may have seemed like the most incredible man in the world, but he set her up to believe that.  He intentionally entranced her and made her feel special and loved.  In the end he was mean and resentful.  He tore her life apart and cost her dearly.

We are all familiar with women who marry for money.  There are plenty of men out there looking for a sugar mama, too. If you are a woman of means, be careful of how much you tell a man about your finances up front.  There is no reason to bring him home to your beautiful house on the first date.

Spend time getting to know him and his financial situation before you offer up too much of yours.

There are a lot of single women who earn more than the men they date.  Not all single men are financially secure or successful.  Many have been financially devastated by costly divorces or are still supporting children or ex-wives.  These may be honorable men who are doing right by their families, so don’t write a man off simply because he has fewer financial resources than you have.

But watch for what’s really going on:

Gold diggers, like other types of abusers, come in all shapes and sizes. Don’t presume because he is well dressed, well educated, or drives a fancy car that he has his financial house in order.

Some men are not particularly good with money and that doesn’t necessarily mean they will take advantage of you financially. But be very clear what you are getting into.

Men who are after something will find a way to charm you into believing they are whatever you are hoping they are.  They will profess their love and claim that your financial differences aren’t an issue.  Keep your wits about you and protect yourself financially.  You may want a prenuptial agreement or some other legal protection before letting him into your house and heart.  Err on the side of caution.  If he’s an upstanding man who truly loves you, he will want you to be protected financially.

Sherry Lutz Herrington is the owner of Sherrington Financial Fitness, a business consulting and accounting firm specializing in strategic business planning and solid financial accounting for businesses. She is also the author of Strong Women Thriving (https://strongwomenthriving.com/), a blog which focuses on empowering women to be financially savvy, particularly after experiencing financial abuse. Sherry is currently writing a new book that both shares her personal story and addresses financial abuse. She can be reached at hello@strongwomenthriving.com. https://www.facebook.com/groups/womensurivingfinancialabuse Join our FB group https://www.facebook.com/groups/womensurivingfinancialabuse